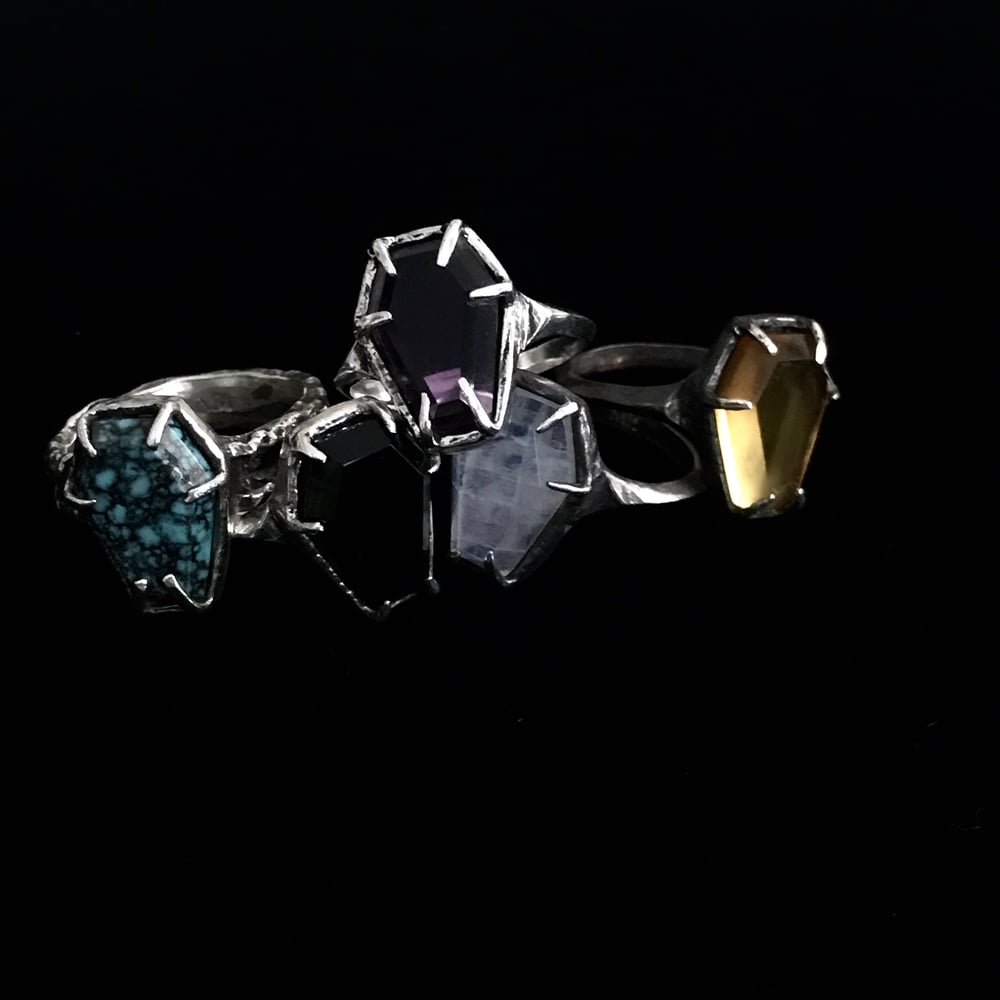 True mystics open themselves beyond what is seen and felt on the surface, beyond life and death, opening a subconscious mind power. Differing religions, social, and psychological traditions have described this fundamental mystical experience in different ways. Electromagnetism, as proven by James Clerk Maxwell, and the interdependent nature of gems along with the various breakthroughs in quantum theory have given us scientific evidence for what the ancients always knew. Because everything vibrates at certain frequencies, they have the ability to shift and alter the frequencies of other objects or bodies when they occupy the same space. This collection is of talismans used by clairvoyants, shamans, and ceremonial leaders of historical civilizations to build your strengths and bury your distress.

Amethyst - In the middle ages, this stone represented purity so was often worn by clergy of the catholic church. The spiritual stone was also historically used by clairvoyants to clarify and heal the mind and body of mental and physical toxins while opening your third eye.

Black Onyx - Popular with the ancient Greeks and Romans, this semi-precious stone absorbs and transforms negative energy into strength, especially during periods of stress, confusion, and grief.

Citrine - Traced back to the Hellentistic era of ancient Greece, this stone carries the power of the sun, manifestation and personal will. It's frequency awakens creativity while transforming dreams/ wishes into reality. This stone dissipates negative energy instead of absorbing or holding it.

Dendritic Quartz - Dendritic branch-like inclusions come from bonding minerals, such as, iron and manganese. These work to bond those disconnected to nature and Mother Earth. It is thought as a conduit of Life Force that can ground and enable a person to understand their role in the natural universe.

Hollowed Clear Quartz - The "master healer" absorbs energy from the sun and the life force in all of nature. It stores all this energy to be released as needed. This energy is released as white light that can be absorbed by any chakra. Hollowed for keepsakes to immortalize, protect, and heal.

Rutilated Quartz - This powerful stone aids in manifestation by stimulating your spiritual creativity, and your ability to implement what you desire in your life, through the power of intention. These stones open clear thoughts and visions allowing you to make contact with the Divine mind and receive Divine inspiration.

Rose Quartz - Lowering stress and tension in the heart, Rose Quartz clears out anger, jealousy, and resentment of others, and allows healing of heart issues and dis-ease associated with holding on to such negative emotions. Known as a romance stone, Rose Quartz can be used to attract love.

Rainbow Moonstone - One of the most sacred stones in India, it was used by High Priests and embedded in the forehead of the god of the moon, Ganesha. In ancient Rome, this gem represents the moon goddess, Diana. It is believed to be the stone of gods and goddesses that can help destroy the ego for spiritual clarity. Some legends claim it can give the power of prophecy when worn on a full moon.